Like every year, it’s been a great one for movies. While the summer was full of high-profile disappointments (Batman v Superman, Suicide Squad, Jason Bourne, ), but has also given us brilliant pictures to think about and rejoice. It was truly difficult narrowing down this list to only ten, as there were so many genuinely great films that came out. Honorable mentions include Moana, The Nice Guys, Sully, Deepwater Horizon and Rogue One: A Star Wars Story.

Without further ado, here are my ten favorite films of 2016!

Note: I still haven’t seen Silence, Arrival, and Moonlight; three films that I’m super excited for but haven’t gotten to seeing. With that, enjoy!

“This job… we try to save as many people as we can. Sometimes that doesn’t mean everybody. But if we can’t find a way to live with that, next time… maybe nobody gets saved.”

In regards to Marvel films, I have become a little jaded to the overtly familiar formula that has embodied the MCU films post-Guardians of the Galaxy. However, Civil War became that much needed change of pace in the MCU to star off Phase 3 right. While nothing particularly shocking happens throughout the somewhat bloated 2 and a half run time, there are a bevy of things to love, with the airport fight and the inclusion of Spider-Man as two enormous highlights for not only the movie itself, but for comic movies in general. But it doesn’t stop there. The Russo Brothers, like with The Winter Soldier before it, put these characters we’ve gotten to know for nearly a decade into places and situations that shake their very foundation. Civil War is a wonderful payoff and culmination of the MCU entire, while setting the stage for impending doom.

“There is nothing a man cannot do once he accepts the fact that there is no god.”

Not much needs to be said about Don’t Breathe. The film is so simple in its premise (teens break into old man’s house. Old man turns out to be killing machine. Teens want to leave) and director Fede Alvarez use that to his advantage, introducing the world to The Blind Man, played terrifically by Stephen Lang. He is a force of nature as a physically terrifying yet feeble man whose intentions are not yet known. As the film breezes along its 88 minute runt time, intentions become crystal clear, shocking the audience with its downright disturbing implications. Don’t Breathe is a horrific triumph. delivering a wonderfully tense and terrifying picture fueled by brilliantly realized performances by Lang and lead Jane Levy.

“Spock: Fear of death is illogical.

Bones: Fear of death is what keeps us alive.”

Definitely the biggest surprise of the year, as well as being the best film of the summer, hardly anyone expected Star Trek Beyond to be any good. J.J. Abrams was no longer directing and was replaced by Justin Lin, the man who reinvigorated everyone’s favorite intellectual property, The Fast and The Furious. The end result delivered a smart, slower, and gloriously Trekkie film than Abrams’ other two. The Enterprise crew has never been better, filling scenes with superb chemistry and wit. While Lin’s limitations as a filmmaker are evident in the slower paced scenes, Star Trek Beyond is a love letter to Trek fans old and new alike, proving that movies can be fun and smart.

“Life’s a little bit messy. We all make mistakes. No matter what type of animal you are, change starts with you.”

Disney has reclaimed the title as the king of computer animated films, and Zootopia is a clear testament as to why. Delivering dazzlingly gorgeous animation with humor that is complimented a timely, heartfelt message about discrimination and minority stereotypes, this is Disney at its storytelling best, introducing the audience to new characters and worlds realized to perfection. Disney has rarely been better.

“Never tell a soldier that he does not know the cost of war.”

Possibly the most overlooked film of the year, Eye in the Sky deals with the horrors of war in the confines of a military base, with its central characters arguing over the collateral damage done in a missile strike. The target: suicide bombers preparing an attack. The potential damage: a little girl and her hula hoop. The film brings up themes of human morale and decency, raising the impossible question of whether or not one little girl’s life justifies the potential demise of others. Sharply directed by Gavin Hood and packed with a powerhouse cast of Helen Mirren, Aaron Paul, and the late Alan Rickman, Eye in the Sky is a slow burn in the best possible way. 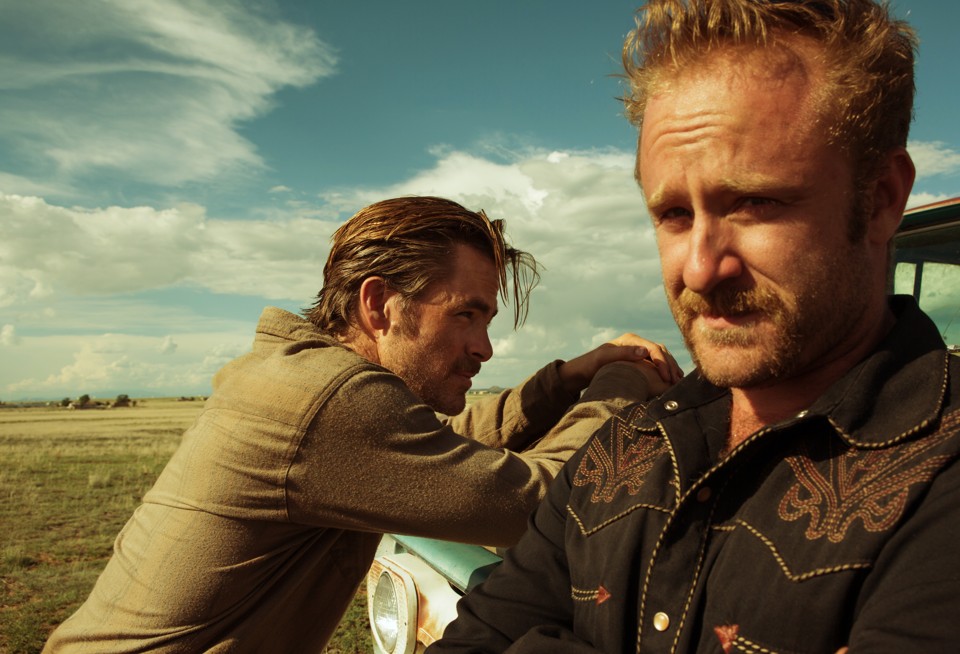 “I’ve been poor my whole life, like a disease passing from generation to generation. But not my boys, not anymore.”

The closest thing to a great modern day western we’ve gotten all year, Hell or High Water is a surprisingly unique and entertaining time. Pitting two brothers turned bank robbers against the always charming and damn near Oscar worthy Jeff Bridges, Chris Pine and Ben Foster will stop at nothing in the hopes of saving their family farm. By the times the credits roll, you might need to remind yourself to take a breath. Sharply funny, Relentlessly tense and wonderfully somber, Hell or High Water is a modern day western done right.

“You’re probably thinking, ‘Whose balls did I have to fondle to get my very own movie?’ I can’t tell you his name, but it rhymes with ‘Polverine’. And let me tell you, he’s got a nice pair of smooth criminals down under.”

No one expected this to be good. Hardly anyone heard of the character. Deadpool was an underground favorite, and many had fears his introduction to the mainstream would kill any popularity he had garnered. The final result, however, was the best comic book movie of the year, with a picture perfect lead in Ryan Reynolds. Insanely profane and genuinely hilarious, with all the violence comic book fans have come to know and love, Deadpool is a bloody breath of fresh air, perfectly capturing the essence of its now iconic title character. As saturated the comic book film genre has become over the years, Deadpool spits in the face of those superhero tropes, yet embraces the wonderful oddities of its own story. It’s a comedy, a semi-drama, a horror film, and also a fantastic love story. As a lover of film and superheroes, Nominated for two Golden Globes (Best Actor and Best Picture), Deadpool is the giant middle finger and also loving tribute to a form of film we’ve gotten all too familiar with.

3. The Edge of Seventeen

“There are two types of people in this world. The kind that naturally excel at life, and the people that wish those people would get blown up in an explosion”.

I had zero expectations for this film. Zip. Nothing. The onslaught of horrifically bad young adult movies as of late has made me jaded of this once great genre. However, like John Hughes’ masterworks way back when, The Edge of Seventeen is a brutally and hilariously accurate look into high school life. Anchored by award worthy performances of one Hailee Steinfeld and the always reliable Woody Harrelson, the film dives in the life of Nadine, a socially awkward teenager just trying to get through her junior year of high school. Sharply funny one moment and heartbreakingly honest the next, The Edge of Seventeen is a comically accurate look into teenage life, complete with all the swear words and delusions of grandeur that come with it.

Mel Gibson is a master in filmmaking. Say what you will about his public persona, and there is much to say, but no one can dispute his ability and impeccable skill as a filmmaker. Hacksaw Ridge is the best war film of this decade, presenting war as the violent hell it truly is. It doesn’t pull any punches, with the camera never afraid the show the unthinkable horrors that those brave men had to witness on a disturbingly constant basis. For the uninitiated, the film follows Desmond Doss, an American combat medic who refused to go into the battlefield with any kind of weapon due to his Christian beliefs. Many saw him as a useless coward, unable to save his fellow man should the time come. In reality however, Doss ended up rescuing over 75 soldiers during the war, a feat too extraordinary to comprehend. Along with Gibson at the helm are Andrew Garfield, Sam Worthington and Vince Vaughn as his cast, all turning in a truly great dramatic turn. However, among these Hollywood greats is Garfield as the lead character, exuding natural Southern charm and strong conviction in his faith when the going gets rough, and it gets rough. Every component of filmmaking is done to perfection, delivering a hauntingly violent, terrifying, and beautiful story of a man and his beliefs.

“Here’s to the ones who dream, foolish as they may seem.”

Whiplash was unquestionably my favorite film of 2014, giving us a greatly intense, stressful and sometimes bloody look at a musician trying to be one of the greats. If that wasn’t enough a testament as to Damien Chazelle’s knack as a natural filmmaker, La La Land unquestionably quiets any and all of those foolish skeptics, delivering a delightful love letter to Hollywood and classic musicals of the past. Beginning with one of the most elaborate and surely iconic sequences in recent memory, the film lends its focus on Mia and Sebastian, two dreamers in Hollywood, fantasizing about a life of success, happiness, and love. These paths eventually cross, producing one of the great love stories of recent memory, and quite possibly the best musical film of all time. Stone and Gosling work effortlessly well with such genuine chemistry that makes you root for them as a couple and as individuals. Musicals are only as good as their music, and La La Land is filled to the brim with musical brilliance. Not a single note falls flat, and with the help of composer Justin Hurwitz, it’s not hard to see why. Despite these praises, however, director Damien Chazelle is the star of the film. Giving the audience a mesmerizing and spellbinding experience on the visual front, Chazelle refuses to end there. Behind the majesty and spectacle of it all, La La Land is, at its core, a declaration to follow one’s own dream, to achieve a destiny placed unto themselves. Mia and Sebastian know no other way to live life than to strive for the impossible. Practicality is a sin in their world, and the theater is their sanctuary.