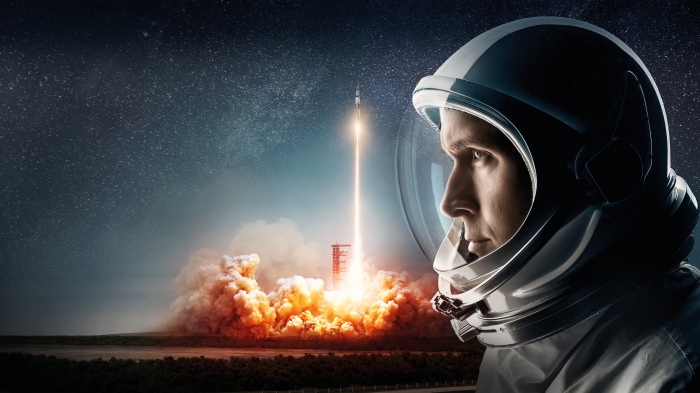 In the span of four years, Damien Chazelle has gone from a wunderkind to a legitimate force to be reckoned with. His last two features Whiplash and La La Land are masterful cinematic works that fully realize the potential of their topics, themes, and characters. With both of these films being my favorite of their respective years, I was instantly on board for whatever Chazelle would do next. Would he make another musical? Go back to the jazz scene? Will JK Simmons destroy the moral and dreams of the main character? In short, the answer is no. First Man is Chazelle’s follow up to his Oscar-winning La La Land, on the spectrum of variety, it seems that he has no intent on slowing down. He has given us a picture that shares completely different DNA from what has come before, delivering an intensely intimate, personal and melancholy character study of Neil Armstrong.

First Man depicts the life and times of Neil Armstrong, beginning from 1961, culminating into the fateful Apollo 11 moon landing. We follow Armstrong through every mountainous high along with every devastating low. First Man very much lives up to its title as it almost focuses solely on the trials and tribulations Armstrong had to endure, as well as his then-wife Janet getting the brunt of it.  Some viewers may expect the film to center around the Apollo crew or NASA as they prepare to take on an immensely dangerous space mission, and those viewers may end up disappointed. This isn’t a modern telling of Apollo 13 or an ensemble piece of the crew. The film focuses on the man, and the turbulent journey he took to be the first man to ever walk on the moon.

In spite of a laser sharp focus, the same cannot be said for its storytelling. First Man takes place over the span of eight years, and despite a lengthy 140 minute run time, the passage of time isn’t done with the care and focus that other aspects of the film are given. There are time stamps that give the audience an idea over how much time has passed since the prior scene, but hardly anything else is done to show how the characters have changed in the span of that time. That certainly may have been the intention given Armstrong’s perceived indifference to the world around him, but the execution can hinder the film’s pacing; and for a near two and a half hour film, that can be severely damaging.

With the narrative focusing primarily on one character, it is imperative to have an actor who can not only be compelling enough to justify their being there, but also bring humanity to a person who has always been described as a reluctant celebrity. Ryan Gosling shines as Neil Armstrong, bringing his trademarked stoicism and quietly fierce demeanor to the role. First Man does not paint Armstrong as an overtly patriotic or grandiose presence. There is a subtlety to Gosling’s performance that brings awareness and attention to whatever is happening to him at a given moment, but also an odd emotional detachment from the rest of the cast that can be initially frustrating for the viewer, but later becomes one of the Armstrong’s defining features. The lack of explosive acting is not to be confused with disinterest or indifference. This is a damaged and emotionally torn man who is tasked with completing what is arguably the greatest human achievement in history. There has to be some sort of reservation within the man.

As expected, Damien Chazelle directs this film with the confidence and prudence that has won over a legion of moviegoers. Stylistically, First Man is head-to-toes different from anything in his filmography. Music is hardly the focus this time around, and on top of this being a biopic, anyone hoping for an encore of Whiplash or La La Land will be left as cold as the blackness of space. There is a handheld, documentarian feel to the movie that legitimately feels like we are watching archive footage from Neil Armstrong’s life. The constant use of closeups, crash zooms and purposeful shaky cam over its grainy color palette ensures a level of realism and intimacy that is lacking in even some of the best biopics. Also, it is nearly impossible to tell what effects were practical or digitally done. The crashes, the soaring of the spaceships, and the lighting transitions from Earth’s blue to the blackness of space is immensely well done and seamless. This is less a cinematic presentation as it is a recreation of what it would actually feel like to be in what is essentially a metal trash can being launched into space. The launch scenes can range from being awe-inspiring to suspenseful to nausea inducing to absolutely terrifying. There is a large abundance of spontaneity and unpredictability to these scenes, which is quite an achievement since this is one of the most documented events in human history.

The moon landing itself, done with IMAX cameras is the true selling point of the film. Gone are the grainy and amateur feel of old. I dare not go into detail as to what happens during the sequence, but it acts as a beautifully done and powerful payoff to the film’s central arc. The omission of an American flag being planted into the moon’s surface has been absolutely blown out of proportion in favor of political speak and the need for a headline. In the context of the film, and the storytelling that is in effect, every shot, cut, use of silence and sway of the camera is done to absolute perfection. In a visual perspective, and as well as a narrative conclusion, the lunar sequence is a near-perfect and satisfying culmination of this incredibly personal story.

First Man is not anti-American. It does not paint a liberal’s paradise or is overtly politically correct. Director Damien Chazelle showcases the humanity and internal conflict of the man who is centered around the moon landing. It is so easy, tempting even, to fall into the media wonderland that was present in covering this event. Political ideologies and patriotism could have easily drowned out the human component of this story. Though not as finely tuned as his prior work, Chazelle has once again given us an experience so special and engrossing, bringing a mastery and wisdom to his craft well beyond his years.