In a Hollywood Reporter roundtable for the 2018 awards season, Spike Lee asked Alfonso Cuaron how he did “that shot”. He was, of course, referring to Roma’s climactic, one shot sequence where protagonist Cleo saves two of the family’s children from getting caught in a strong current despite not knowing how to swim. The family embraces Cleo and expresses their love for her and her selflessness, before admitting a truth that makes it even sadder and more powerful. All of this is done through a single, uninterrupted take, scored only by the crashing waves and the aching authenticity of the dialogue.

Being notorious for his several feuds with fellow filmmakers, it’s something of an achievement to garner praise from Lee, unafraid to speak his mind whenever he deems necessary. Unsurprisingly, it was Cuaron’s Roma that elicited Lee’s wonder and appreciation of the craft. A semi-autobiographical tale of a housemaid in Mexico City, Roma is one of 2018’s finest gems, bringing life to 1970 Mexico in a way that was uncompromised by cinematic sweetening or rose tinted glasses. Cuaron was set on making a film from the recesses of his memory with as much detail and truth as possible. The end result is a masterwork of sight and sound that shows how cinema can emulate not just emotion, but life itself.

Enter Da 5 Bloods, the new Spike Lee Joint. Following up his Oscar winning effort in BlackKklansman, Spike focuses on 5 black Vietnam War vets who come back to ‘Nam to recover the remains of their fallen comrade as well as a ton of gold they hid away. At 2½ hours, he explores the morality of the war (before and after), how the Vietnamese view Americans, friendship, loyalty, PTSD, and memory.

The first thing that made me draw comparisons to Roma was the use of digital cameras. Despite being in black-and-white and taking place in the 70’s, Cuaron shot in crisp 4K resolution. He made this choice because he believes memories are never viewed with film grain, but the clarity provided by the human eye.

“I wanted it to be a film where you are in 1970, but shot in a more contemporary way,” Cuaron said in an interview. “It was about the moment and it was about trying to portray the intangible, like in life.”

Da 5 Bloods uses several aspect ratios and camera resolutions to distinguish one time period from the other. Scenes taking place during the War are shot in grainy 16mm film, Ultra HD 2.39:1 digital when the group is in the city, and expanding to 16:9 when they reach their journey in the jungle begins. While this differs with Roma’s singular resolution/aspect ratio, they are both deliberate artistic choices to set the mood for the stories. Cuaron shows the tragic beauty of everyday life, and Spike illustrates the horrific impact a single point in time can make.

Da 5 Bloods uses the same actors for all 3 shifts. Without the use of digital de-aging, the Vietnam War scenes show the entire group as they look in the present day, with Chadwick Boseman’s deceased comrade being the youthful standout. It easily plays into the themes of memory and especially PTSD, as if these characters look back at that time and only see their current selves, because that’s all they can see. Even though they have had nearly 5 decades worth of civilian life, there are many who can’t move on from what they experienced, perhaps ready and waiting for the next fight (Delroy Lindo’s Paul is the epitome of this).

Both films’ sound designs are what truly make them shine. Apart from being a visual masterclass, Roma implements Dolby Atmos sound to immerse the viewer towards not only what is seen, but what is being heard. A radio playing in the corner of the room, muffled conversation in the street, the passing of cars move past the screen along with the audio complementing everything that is happening inside and out of the frame. If you have access to a home theater system or some good headphones, the film becomes a haunting peek into Alfonso Cuaron’s memories as he tells his most personal story yet.

It’s not much of a stretch to say that Spike Lee was influenced by Roma’s sound design and how it can make a setting feel lived in and real to the audience. Da 5 Bloods incorporates much of the sound techniques found in Roma: utilizing the entire frame to the auditory experience almost symbiotic with the visuals. If wearing headphones, gunfire can be heard in the corner of a single side, gradually crescendo-ing to the other end as the camera moves that side. Background conversation is heard relative to a given character’s perspective. If Paul is by himself in the bar and overhears his friends in the other side of the room, so do we. Doing this adds towards character investment. The story of Da 5 Bloods is very much a journey, a group of soldiers trekking across the unknown that they’re all too familiar with. To hear what they hear and see what they see makes you feel like you’re there with them, having a front row seat to a life changing odyssey.

With filmographies as rich as these 2 filmmakers are, their respective most recent efforts open reveal an insight never before seen. The beauty of Roma’s look at everyday life is only made possible by Alfonso Cuaron’s handle on filmmaking and ability to paint a picture that can be seen and heard. Spike Lee could have only made Da 5 Bloods at this stage of his career. Being known as a filmmaker who can entertain yet reveal sobering realities that plague our country, he’s been honing his politically charged craft from Do The Right Thing and hasn’t stopped since. He’s had his ear on the streets ever since then, and his latest Joint shows a weariness yet urgency to a struggle that remains prevalent to this day.

Mild spoilers for Once Upon a Time… in Hollywood

My first Tarantino film was 2012’s Django Unchained. It was my cinematic Big Bang, where I realized that movies were a collaborative experience in the vein of help achieving one’s imaginative vision. It helped me realize that film was an art form to express one’s self through comedy, violence or tragedy. It blew me away, more so than any other film I’d seen up to that point. Fast forward to today and I can confidently say that Tarantino is my favorite filmmaker, mainly in part to how he’s become the artistic definition of the word “director”. There are very few, count-on-one-hand filmmakers that can attract an entire audience solely by being involved, and I see him as the marquee name to that distinction.

It’s been interesting following his career. Starting as the new kid, the hot shot with Reservoir Dogs, then turning the cinematic medium upside down with Pulp Fiction, a film whose popularity and cultural influence could have easily typecasted Tarantino into making films like it. We now know that one of his greatest directorial strengths is adding variety to his work. In the quarter century since Pulp Fiction came out, we’ve seen Tarantino go into the blaxpoitation, martial arts, samurai, war, western and who dunnit genres, all with outstanding results. His love of cinema permeates each and every time he puts a film out, which makes Once Upon a Time… in Hollywood so special. With a filmography as dense with cinematic allusions and tributes as his, it’s surreal to watch a Tarantino film that takes place in the city, the industry that he unabashedly loves; it’s like Michael Bay directing a fireworks shop owner, or JJ Abrams making a Thomas Edison biopic.

Tarantino’s latest is predictably a love letter, a beautiful reminiscence of a time before. Rick Dalton, once the talk of the town, sees the parade pass him by, not as the main attraction, but a lowly bystander. He is desperate search for the next big job, slowly coming to the conclusion that there may never be a “next job”, not like before. Leonardo DiCaprio is cast as said movie star, with Brad Pitt’s Cliff Booth as his right hand (stunt)man.

What makes OUATIH unique from the rest of the director’s films is context, both narratively and within Tarantino’s career. He’s famously said that he’ll stop directing after his tenth picture, expressing his worry that going further may ruin the prestige of his work. If that’s to be believed, and we hold him to his work, we’re entering the theatre witnessing the true twilight of his career. No longer is he the hotshot who reignited John Travolta’s and Pam Grier’s career, or the center of the movie violence argument. In a time of sequels, reboots and remakes, the idea of the movie star or original IP is slowly becoming quieted out in favor of surer, easier investments. A new wave of cinema is starting to set in, and Tarantino knows this. He’s always been a champion of film, and rightly views it as an art, an event where one should prepare themselves to go to. He still shoots on film, hates the mere thought of CGI, and wouldn’t dare be a director for hire. He knows he’s old fashioned, and his latest film is a meditation on that feeling, even becoming a little insecure about it. The two main characters spend the vast majority of the picture looking back at the good ol’ days or try their best to replicate that success. It’s all done with sincerity and authenticity, as if Tarantino is writing Rick Dalton through his own eyes. Rick hates hippies, and maintains a well-mannered, clean shaven demeanor, even if he stands out from the rest of the city. He doesn’t follow the current trends because he knows no other way than what he knows. Nostalgia is a powerful drug, and it’s used to infectious and tragic effect. 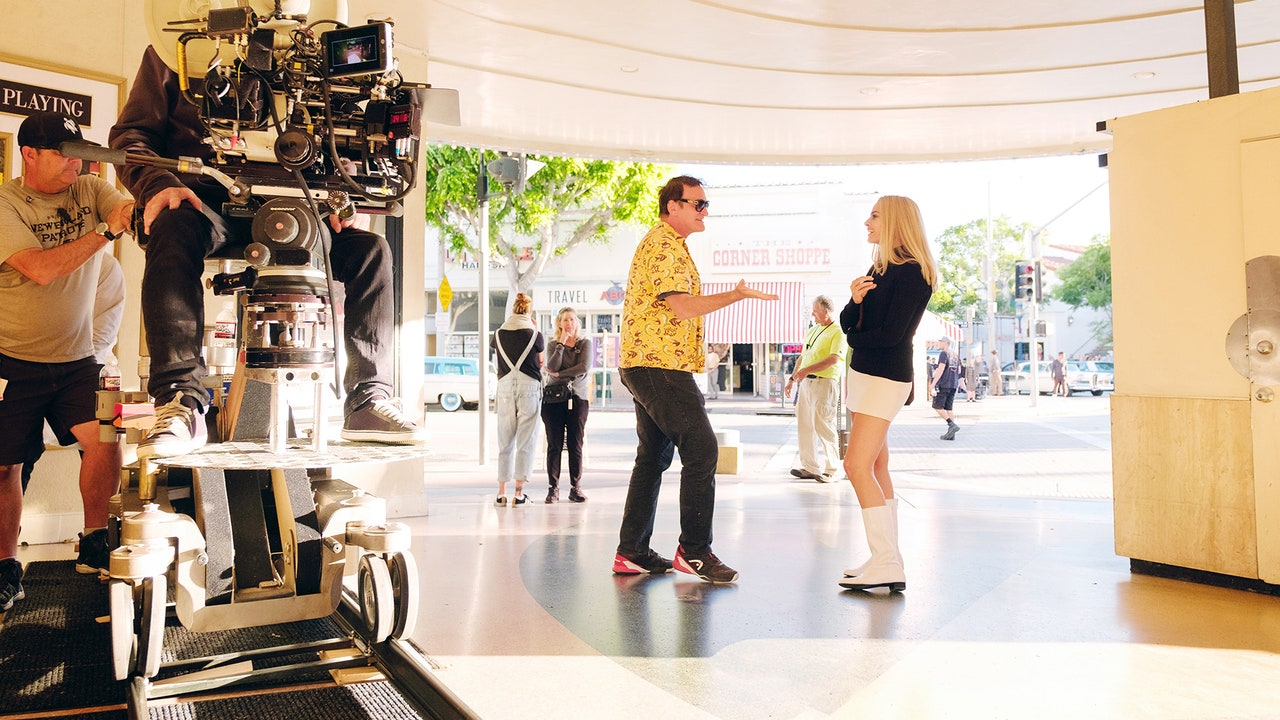 Sharon Tate is prevalent to the story, being a beacon of light and optimism that the new wave of cinema would bring in the oncoming decade. Her place in the story has become the central place of criticism for the film, ranging from the apparent lack of any meaningful screen time or how inconsequential she is in relation to the Manson family subplot. The critique of ample screen time is understandable sure, but the intent with Tate’s character isn’t just “Tarantinoing” her up, but instead act as the New Wave ready to take over Hollywood. Her optimism, kindness, cheerfulness is a direct contrast to not only the central protagonists, but how many view her legacy. Tarantino doesn’t dwell on the violent reality that Sharon meets, an event that will forever change how we look at her career and body of work. Here she’s portrayed as a star on the rise, one who lives in the moment dreaming of a fruitful career. She’s essentially the least flawed character Tarantino has ever penned, a brilliant juxtaposition to a violently tragic reality.

Once Upon a Time… in Hollywood is Tarantino’s Roma. This has all the trappings of a film made by him, but has moments that are so drawn out and specific, that we’re able to see the director’s gleeful affinity for cinema but also be wrapped up in its melancholy. It’s an examination of one’s own body of work and questions its own relevance going forward. This isn’t an old man shouting to the sky in rejection of the future, but rather a bittersweet tribute to a time that was pure and innocent, a fairytale of what was and what should’ve been.